On 1 April 2016 my father passed away.  He had lived without my mother for 15 years in the house they designed and built together.

My father was over 90 years old and had lived a full fifteen years alone.  While healthy and active, he didn’t keep house like my mother.  And, as many of you know, people who feel alone often collect things.  My father collected things.  He had twelve non-working lawn mowers in his yard.  That should give you an idea.

After discussing with immediate family, my brother and I, as executors to my father’s will, made the decision to sell my father’s house.

We tried to clean it ourselves but the job was too big.  Too many emotions attached.  Too much stuff.  We soon realized that we were, in fact, cleaning out other people’s stuff.

We hired a company to clean my father’s house.  We tagged the big pieces of furniture that we wanted.  I have my father’s grandfather’s chair.  And the rest was to go to charities or just the dump.  We paid tens of thousands of dollars and we paid with our hearts.

When the house was finally clean.  It was ready to sell.  As is.  There were no appliances left working in the house except the cook top and oven. And there had to be a new septic system installed before anyone could live there.

We were approached by speculators who wanted to purchase the house for a song, and knock it down to build something new.  But, in very short order, it seemed, we had two families interested in buying my father’s house.  Soon it was one family.  They were very interested in making my father’s house their home.  They appeared to understand the importance, to my brother and I, that someone bring life back into that house.

We grew up there.  We had Thanksgivings and Christmases there.  Birthday parties.  Family picnics.  Wedding showers.  It was our home.  Now, sadly, it was simply my father’s house.

My father would love that.  He would love to be in his yard playing with happy children again.

My daughter and grandsons and I went to visit what was my father’s house the other day.  We were invited.  My brother and daughters and I purchased a gift certificate for the children to have a wooden swing and playhouse.  We all felt it was a fitting tribute to my father’s memory.

One of my grandsons and one of the new residents of what was my father’s house spent a happy time playing together.  I could see my father smiling and I think I heard him laughing too. 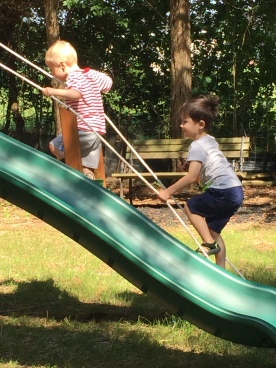 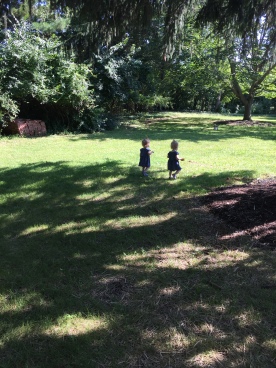